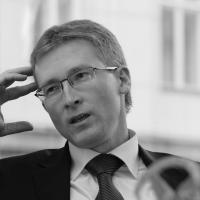 Marek Orko Vácha, born in 1966, is a Roman Catholic priest. He graduated in Molecular Biology and Genetics from the Faculty of Science of Masaryk University and studied Theology in Olomouc and Brussels. In 1997 and 2000, Marek Vácha participated in two expeditions to Antarctica, and he spent six months in the Abbey of Sept-Fons – a Trappist monastery in France. He is the Head of the Department of Ethics at the Third Faculty of Medicine of Charles University as well as a parish administrator in Lechovice near Znojmo. He also teaches a seminar on the relationship between Christianity and ecology at the Faculty of Social Studies in Brno and works as a vicar at the Roman Catholic Academic Parish of Prague St. Salvador Church. He publishes in an array of both popular magazines and specialized periodicals and deals with topics such as evolutionary biology and medical and environmental ethics.
‹ ›